A couple of days ago my friends saw a series of posts on Facebook. 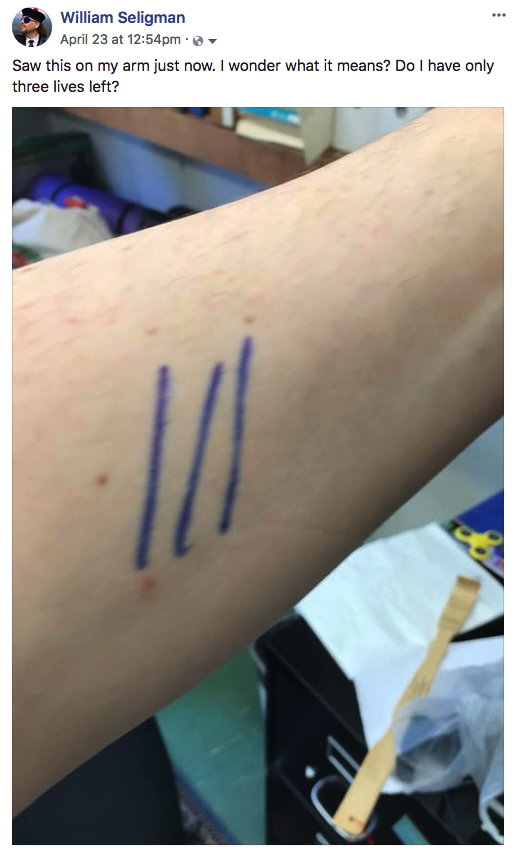 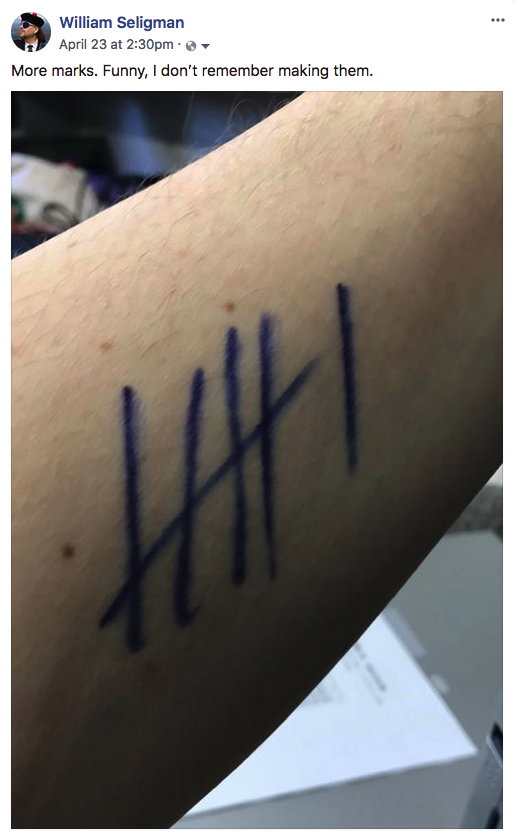 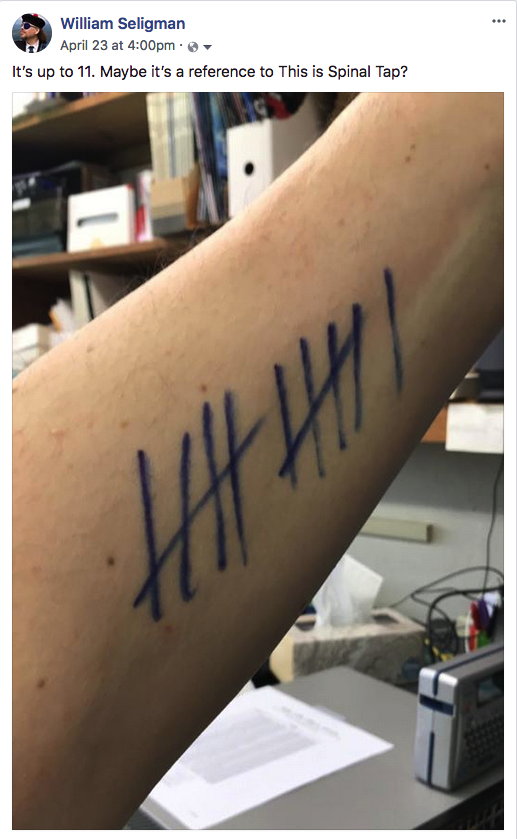 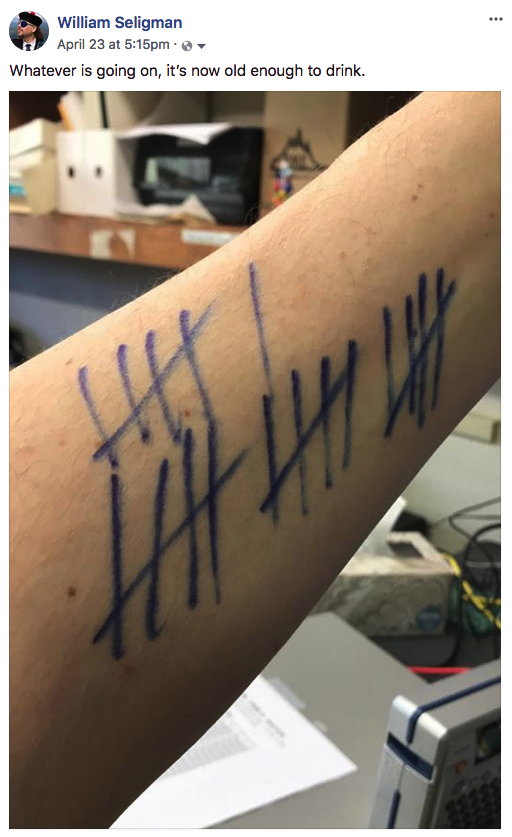 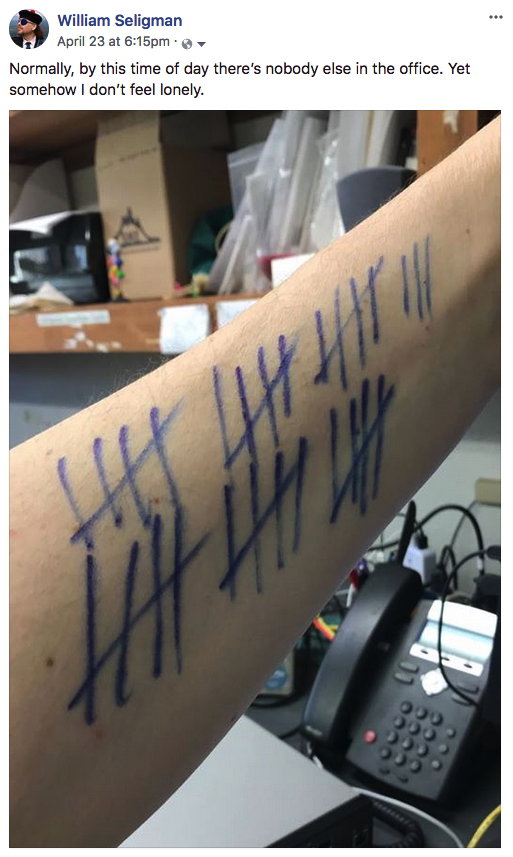 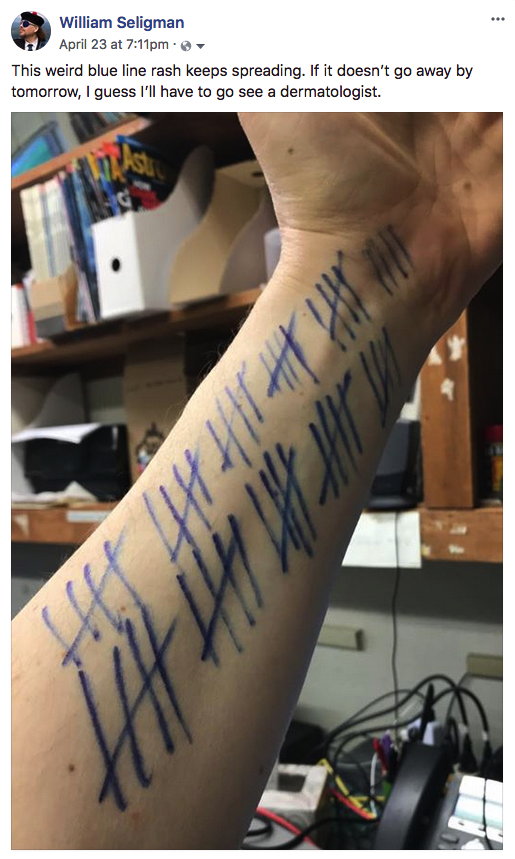 As a couple of people guessed, this had to do a fictional race called The Silence from the TV series Doctor Who. In the show, the chief property of The Silence is that you forgot about them the instant you looked away. The only way to be aware of them was to make quick tally marks on your arms for every one you saw… and then forgot.

A couple of weeks earlier, someone posted about doing the tally-mark bit as a prank. In a comment, there was a suggestion that this be done on April 23, the date that the Doctor Who episode The Impossible Astronaut aired. That was the episode that introduced the The Silence.

It was just a bit of silliness. If you do some searching, you’ll find other people celebrate Tally Mark Day.

It wasn’t the first time I did something like this. Many years ago, I celebrated Towel Day: In honor of Douglas Adams’ Hitchhiker’s Guide to the Galaxy, I wore a towel for the entire day draped around my shoulders. It showed all the hoopy that I was a frood who deserved to be sassed.

It turned out to a practical prank. During that day, a friend of mine called me and asked me to pick up his girlfriend at a local airport. How was she to identify me? No problem, I said. Just tell her to look for the guy wearing the towel.

As I drove her to my friend’s home, he asked that we stop and get some pizzas. They were really hot, straight from the oven, but the back seat of my car was filled with stuff. My passenger had to hold the hot pizza boxes on her lap. Was it a problem? No, because we had a towel. It kept her from getting burned, and soaked up any potential pizza juices that might have leaked.

So if you see someone wearing a towel on their shoulders, or with tally marks on their arm, it’s just a celebration of geekdom. It doesn’t mean the Earth is about to be destroyed to make way for a hyperspacial bypass or annihilated to prevent the Last Question from being answered. Probably.